Teanu is the main language spoken on the island of Vanikoro, in Temotu, the easternmost province of the Solomon Islands. It has about 1000 speakers, among whom most are on Vanikoro, while others live in the country’s capital Honiara (on Guadalcanal island). 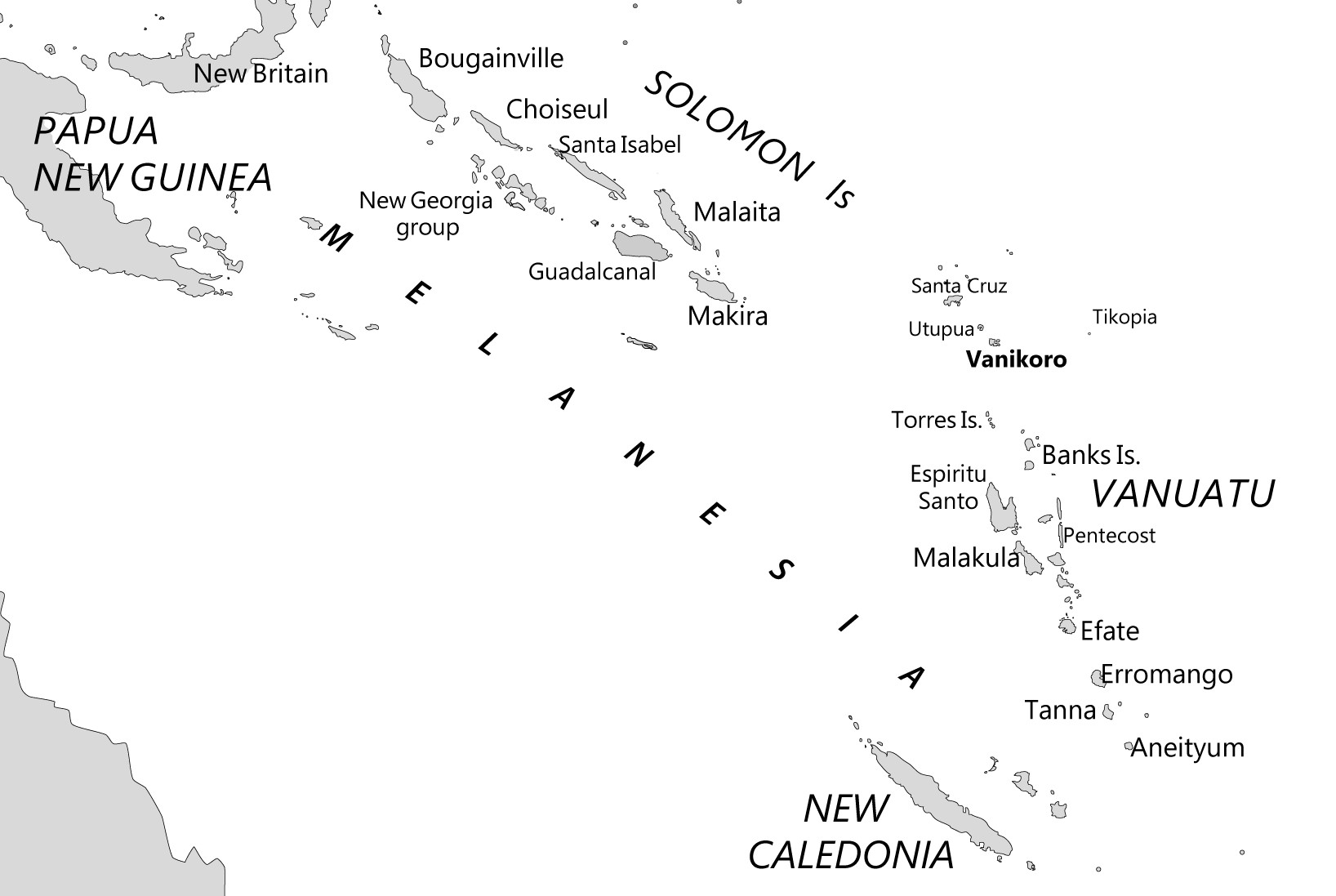 The language receives its name from Teanu, the island located northeast of the Vanikoro island group (the second island in size, after Banie). The same language has also been known in the literature as Puma or Buma, after the main village of Teanu island.
In earlier times, the island group of Vanikoro used to be divided into three tribal territories, each with its distinctive language: Teanu in the northeast, Lovono in the west, Tanema in the south. During the 20th century, the latter two languages became almost extinct, and replaced with Teanu.
Teanu, Lovono and Tanema, the three indigenous languages of Vanikoro, are all Oceanic: they thus belong to the vast Austronesian family that covers most islands in the Pacific. Within the Oceanic family (≈500 languages), Vanikoro languages belong to “Temotu” – a smaller subgroup with about ten languages, located in the province of the same name.
Besides its indigenous Melanesian population, the island of Vanikoro is also home to a Polynesian community that has been colonising the southern shore since at least the 16th century. Their homeland is Tikopia (the easternmost island of the Solomon archipelago), and their language is Tikopia or Fakatikopia.

The island of Vanikoro is difficult to access, due to the absence of an airstrip. The only flights from the capital reach Lata, the provincial capital on Santa Cruz island; from there, one must wait for a ship to reach Vanikoro. People are frequently lost at sea.

François came back in 2012, as part of a scientific expedition by geologists, who were exploring the impact of sea level rise and of seismic activity on Vanikoro. On that occasion, the linguist made more recordings of the island’s two dying languages, Lovono and Tanema.

Altogether, François spent 29 days working on Teanu, whether on the language itself or on its oral literature and music.

The notes below focus on the stories that are here provided with a transcription and/or translation.

Two stories told by Chief Thomas (†2009) revolve around the historical figure of the late Lapérouse – or rather, what became of him in the local folklore. “The message left by Lapérouse” and “The chest left by Lapérouse” are short anecdotes about the early navigator, seen from the islanders’ point of view.

In this story, Mofet Bwana explains how large canoes, once they’re cut from large trees up in the bush, are dragged from the mountain all the way down to the coast. A sorcerer plays his magic to make the canoe lighter, and men sing songs to cheer themselves up, till the canoe reaches the shore.

2.2.3 The island of the Dancing Spirits

The story of the Dancing spirits, told by Chief James Cook Pae (†2014), tells us about the origin of the “Tamate” spirits, who regularly visit the island of Vanikoro to dance in public [see photo]. (See another presentation of this myth here.)

Once upon a time, a couple from Vanikoro got lost at sea, and finally landed somewhere in northern Vanuatu. That mysterious island was not settled by humans, but by beautiful creatures called Tamate. (The word Tamate is common in north Vanuatu to refer to “ghosts”, “spirits” and “dancing masks”.) The couple was so enthralled by their dance, that they asked to bring back some Tamate creatures with them back to Vanikoro.

2.2.4 Mwasu and the forbidden woman

The same storyteller, Chief James Cook Pae, told us the myth of Mwasu. This story explains how Pakare – a village on the west coast of Vanikoro – was entirely devastated.

Once upon a time, the community of Pakare organised a dancing festival on two offshore islets; almost everyone left the mainland to spend weeks there. Only two people remained in Pakare: one young man called Mwasu; and in another part of the village, a woman who had just given birth. As Mwasu was picking apples, he saw that woman, and fell in love. The problem is, they were cross-cousins (leka), and any relation between them is taboo. Mwasu asked his cousin to come with him, but she refused – no matter how much he insisted: she was terrified of what their relatives would say. But Mwasu’s urge was so strong, that he finally decided to slaughter the whole community. By throwing two heavy stones, he destroyed the two islets, and wiped out the entire population of Pakare. Finally, the woman accepted to follow him.

This story is the myth of origin of the kauri tree (Agathis macrophylla) – the most valuable tree species of Vanikoro.

A couple was living in Lovono, a village in the north of Vanikoro. The woman was pregnant, but instead of a child, she gave birth to a strange thing: a sort of stone or pinecone. Surprised, she decided to plant it in the ground. Some time later, a plant grew out of that thing – and became a large tree, which they had never seen. When that tree yielded its own fruit, the couple planted it around the whole island. This is how Vanikoro ended up covered with kauri trees.

The orthography proposed for transcribing the Teanu texts follows this alphabetical order:

The phoneme inventory of Teanu includes 19 phonemic consonants. Table 1 lists the phonemes themselves (using IPA); the orthographic convention is shown in brackets. For example, the letter ‹ j › in the orthography encodes the prenasalized palatal stop /ᶮɟ/ – e.g. vijele [fiᶮɟele] ‘bottle’.

Table 1 – The 19 phonemic consonants of Teanu

Teanu has five vowels, all short.

Table 2 – The five vowels of Teanu

Teanu shows a preference for open syllables CV, and all words end in a vowel. However, consonant clusters are sometimes found word-internally (resulting historically from the syncope of a high vowel /i/ or /u/):

Table 3 – A sample of Teanu words, with or without consonant clusters

Feel free to visit the online dictionary of Teanu.

For more on the languages of the region, visit https://tiny.cc/Vanikoro-lgs.