Mwotlap is a language spoken by about 2,100 people in the Republic of Vanuatu.

It is geographically anchored in the island of “Motalava” (locally “Mwot­lap”), in the Banks islands, in the northern part of Vanuatu. Many Mwotlap speakers also live in the country’s two cities – Luganville (Santo) and Port-Vila, the capital.

The phylogenetic affiliation of Mwotlap is the same as the other 138 languages spoken in Vanuatu: Mwotlap is an Oceanic language – and thus a member of the vast Austronesian family that covers most islands in the Pacific. 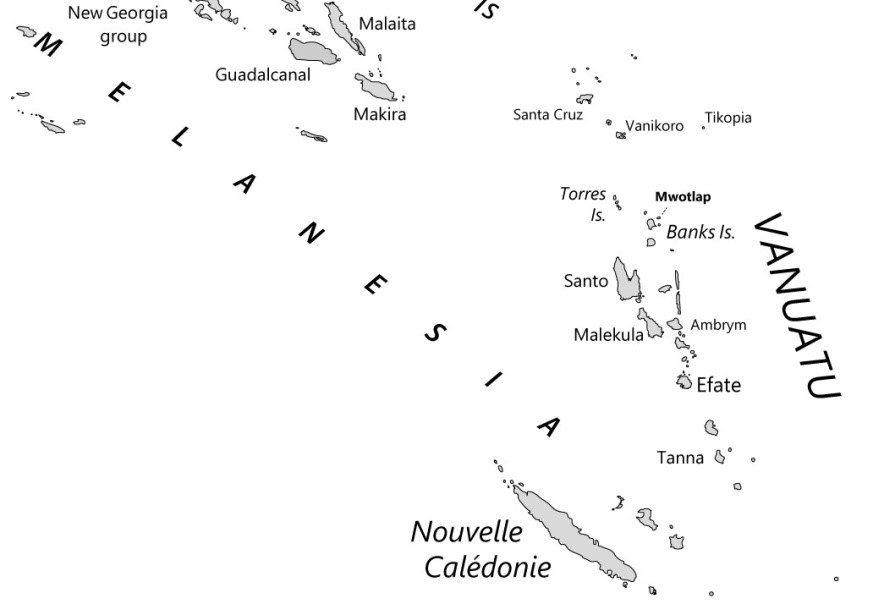 Since speakers of Proto-Oceanic (“POc”) first reached the shores of Vanuatu about 3,200 years ago, the archipelago’s original linguistic unity broke out into a mosaic of dialects, which in turn have become separate languages. With its 2,100 speakers, Mwotlap is the healthiest among the 17 languages of the Torres and Banks islands. Another language variety, called Volow, used to be spoken in the eastern part of Motalava, but it went extinct in 1986.

Mwotlap’s traditional culture is a society of farmers who grow tubers and raise pigs and poultry – but also hunt for birds and crabs, and practice various forms of fishing at sea. Mwotlap people always had contact, trade exchanges and intermarriage, with the other social groups on the islands around Motalava. Egalitarian multilingualism was the norm, and it was common, until recently, for individuals to speak 2 or 3 languages fluently.

Current generations are also experiencing modern life, particularly in the city. In urban contexts, the pressure is high to replace indigenous languages such as Mwotlap with the country’s national language Bislama – an English-based creole that emerged during colonial times. All speakers of Mwotlap are bilingual in Bislama, and many loanwords from English or French actually enter Mwotlap through Bislama. The rapid spread of internet technologies since 2015 is increasing the pace of language shift towards Bislama or even English.

The Mwotlap language had never been documented when I began my first year of immersive fieldwork in Vanuatu in 1997-98. By spending several months with families in Port Vila, Santo and on Motalava, I progressively became fluent in the language. My knowledge was consolidated through further field trips of several weeks each, in 2000, 2003, 2004, 2005, 2007, 2011.

The main anthropological work is Vienne (1984) – which added to the pioneering studies by Codrington (1891) on the Banks Islands as a whole. Together with ethno­musicologist Monika Stern, in 2013 I published a book on the dance, music and poetry of northern Vanuatu – together with an audio CD titled Music of Vanuatu: Celebrations and Mysteries. This publication was based on many dozens of hours of fieldwork recordings on dance and music, which are also archived in the present collection. 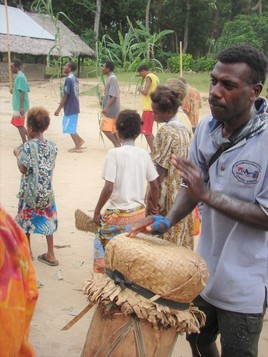 A fair part of my work in the field was dedicated to documenting the language itself, through language learning, targeted elicitation, and the use of homemade questionnaires. My field notes are archived in the ODSAS collection (link).

But my main activity as a linguist consisted in creating audio recordings of speech and music.  Out of the total of 1000+ audio archives I recorded in Vanuatu or the Solomons in 21 different languages, 389 were traditional narratives – including 103 for the sole language Mwotlap. All of those stories are archived in the Pangloss collection, and can be listened to freely. I transcribed 52 of these Mwotlap stories with the help of native speakers, yielding a 100,000 word literary corpus. Among them, 38 stories are presented here with annotations – in the form of transcription and translations in French and/or English.

In 2003, I turned a selection of these traditional narratives into a collection of the best Mwotlap myths and legends; I published it as a monolingual (Mwotlap) book, meant for promoting vernacular education in local schools of the community. This book, Tog tog i van en (“Once upon a time”) is available from this page.

While most of my corpus consists of these oral narratives, other archives include conversations, as well as musical recordings of all sorts: a cappella songs; dancing music recorded during multiple village celebrations; sung poems; ‘stringband’ popular songs; church hymns; children rhymes, etc.

The three wives of the gecko

Two close friends of Motalava island decided that when they had children, they would want them to marry each other. Eventually, the chief of Aliwan had three daughters, but the chief of Telmitig gave birth to… a gecko. Many years later, the firstborn girl was ready to get married: but when she discovered the groom was not a man but a squeaky, creepy little creature, she ran away screaming. A while later, the same happened to the second sister. The poor gecko was left alone unmarried – but when the third sister came, to everyone’s surprise she fell in love with the animal. Her love turned the gecko into a man – a young and handsome man. Alas, this aroused the jealousy of the two elder sisters. What did they do?

A young man brings back home a young woman, without doing the proper engagement rituals with her family. His father, worried about the risk of conflict with the girl’s family, finds a Cordyline tree, and carves a human figure, hoping to scare the rival family away with a scarecrow-like statue. To everyone’s surprise, the wooden man turns to life, and starts protecting his new family by fighting people… to death.

Over time, Cordyline often goes out with his brother to hunt for birds, owls, flying-foxes; every time, he strikes his arrows perfectly, and never misses. One day, his human brother turns jealous of Cordyline’s hunting skills, and tells him he is not really a member of the family, that he was just carved in wood. Saddened, Cordyline decides to leave this world. He shoots arrows onto the clouds, one into the other, till they form a long vine – then he seizes it and swings away. What will happen to him?

Romanmangan, the Fairy from the Other World

A young boy goes alone in the forest, and meets with a group of flying demons. One of them is Romanmangan, a fairy who kindly protects the boy. As the dawn comes, she follows the boy to his home, and becomes his wife. Many years later, the couple has grown up, and given birth to a child; but Romanmangan’s husband is now a jealous man, who often beats his wife. One day, her grief is so strong, that she jumps in a fire, and dies. She leaves the world of the Humans, and returns to the world of Spirits. Her husband regrets deeply his wife’s fate: together with their son, he sets out to magically visit the world of the Dead, to try and bring her back. Will they succeed?

The femme fatale and the murdered prince

On Vanua Lava island, a beautiful woman called Yom̄ogvetvet turns down all her suitors. But one day, she meets a handsome young man called “Prince” (Nōwōgit) – the son of a high chief from another village. Their tender love arouses the jealousy of the other suitors: one night, they ambush the Prince and club him to death, leaving him under a rock.

His father then asks a witch for her help. Thanks to shamanic dreaming, the witch retrieves the location of the young man’s body. Then over several days, she performs more magic to resurrect him. Will she succeed?

Song: The volcano of Ambrym

I recorded this song twice:

This is a song from the nawha titi genre, of dancing poetry. In just a few lines, the poem evokes the power of volcanoes, particularly the one of Ambrym in Vanuatu. The song is featured in the CD I created with ethnomusicologist Monika Stern (François & Stern 2013 – see p.116 of our e-book).

The poem is not sung in the same language as spoken Mwotlap, but in a special “song language” that only exists in songs and poetry.

An overview of the grammar of Mwotlap can be found in François (2005) – and a more complete description in François (2001, 2003a). My cultural dictionary of Mwotlap (work in progress) is available at tiny.cc/Mwotlap-dict. The bibliography below lists a number of articles dedicated to the description of Mwotlap, or to comparative studies of northern Vanuatu languages – including Mwotlap. Other resources can be found on my professional page at CNRS–Lattice, or on my personal homepage.

The Mwotlap texts in this archive are transcribed in the language’s orthography.

Mwotlap has 16 phonemic consonants. The following chart lists the phonemes themselves (using IPA); the orthographic convention is shown in brackets. For example, letter ‹q› in the orthography encodes the labiovelar stop /k​͡pʷ/.

Table 1 – The 16 phonemic consonants of Mwotlap

The voiceless bilabial [p] is not a phoneme: it is the phonetic realization of /β/ syllable-finally. Although it is not phonemic, it is transcribed in the orthography as ‹p›:  e.g. /βɛl/ [βɛl] is spelled vel, but /lɛβ/ [lɛp] is lep. No word begins with ‹p›. The consonant has no rhotic |r|, except in a handful of loanwords.

Mwotlap has 7 vowels, all short.

The personal pronouns of Mwotlap distinguish four numbers: singular, dual, trial, plural. They also strictly encode the contrast between ‘inclusive we’ [=you & me & others] and ‘exclusive we’ [me & others]. Thus the pronoun dō(yō) “1inclusive: dual” means ‘you & me’, whereas kamyō “1exclusive: dual” will read as ‘one person (other than you) + myself’, i.e. ‘me & him/her’.

I would like to express my gratitude to the many individuals from Vanuatu who so generously shared their time with me, teaching me their beautiful language of Mwotlap. To name but a few, my warmest thanks go to †William Hagēt, †Moses Meywēlgen and his family (Minnie, Pelet, Melton, Deden, Harēson, Lola), Edgar Howard.

For more on the languages of Northern Vanuatu, visit http://alex.francois.online.fr.

The following selected publications present various aspects of the Mwotlap language and culture:

Codrington, Robert H. 1891. The Melanesians: Studies in their anthropology and folklore. Oxford: Clarendon.

My cultural dictionary of Mwotlap can be found online: