Lovono is a dying language spoken on the island of Vanikoro, in Temotu, the easternmost province of the Solomon Islands. The former Lovono community has now adopted Teanu as their main language; Lovono itself now survives in the memory of a handful of passive speakers. 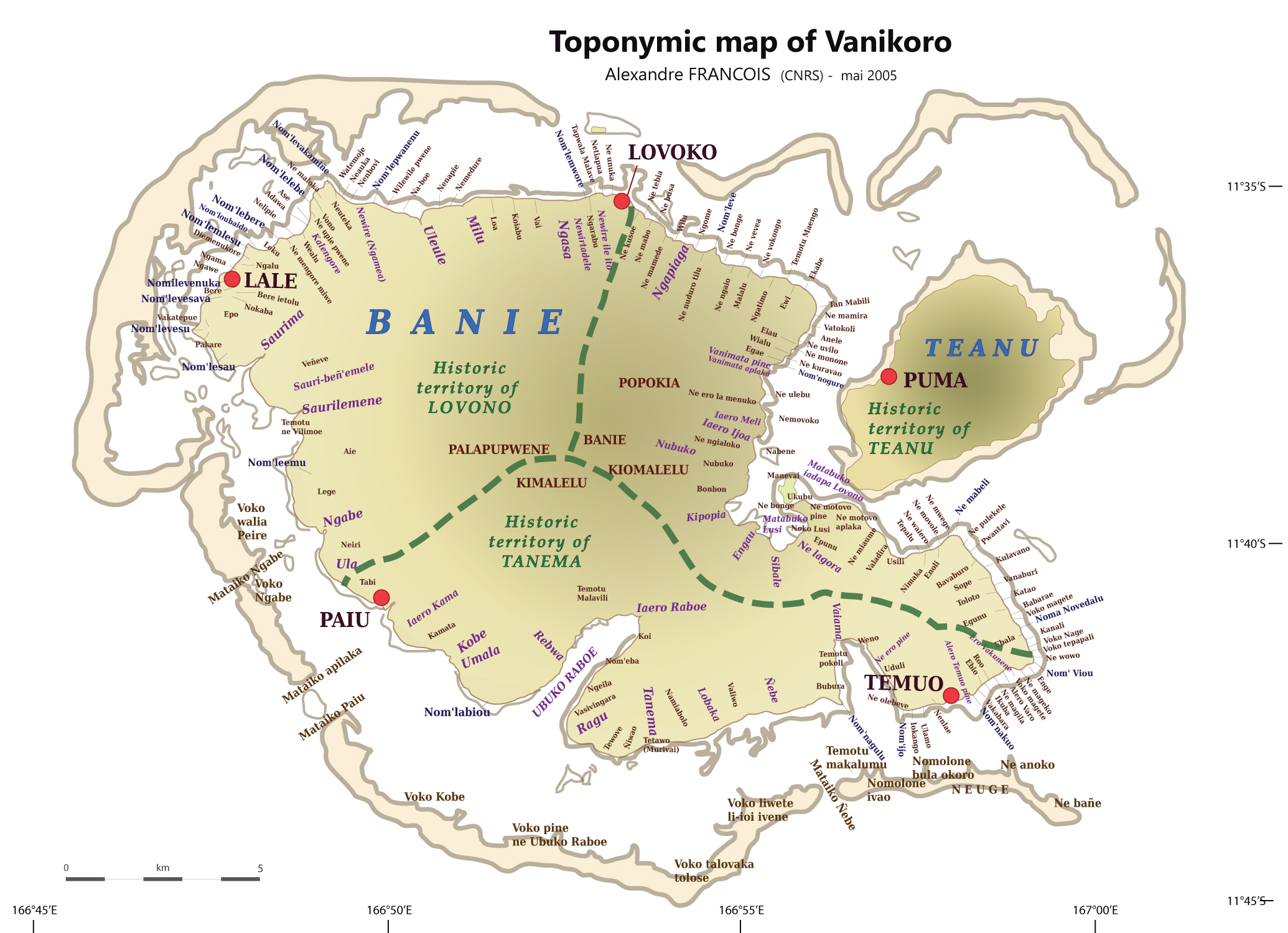 In earlier times, the island group of Vanikoro used to be divided into three tribal territories, each with its distinctive language: Teanu in the northeast, Lovono in the west, Tanema in the south [map]. During the 20th century, the latter two languages became almost extinct, and replaced with Teanu.
The Lovono tribe used to be based in a now abandoned village of the northern coast of Banie. This village was named “Lovono” in Teanu, and “Alavana” in the local Lovono language. Written sources from the 19th century (Dillon 1830, Gaimard 1834) called the place Vanou or Whanou. When that ancient site was abandoned, its population moved to the new villages of Lale [NW] and Lovoko [N].
When the French naturalist Gaimard published in 1834 his first word lists of Vanikoro’s three languages, he focused on the western language Lovono, which he actually called “Vanikoro”.
Teanu, Lovono and Tanema, the three indigenous languages of Vanikoro, are all Oceanic: they thus belong to the vast Austronesian family that covers most islands in the Pacific. Within the Oceanic family (≈500 languages), Vanikoro languages belong to “Temotu” – a smaller subgroup with about ten languages, located in the province of the same name.

François came back in 2012, as part of a scientific expedition by geologists, who were exploring the impact of sea level rise and of seismic activity on Vanikoro. The linguist then made more recordings of the island’s two dying languages, Lovono and Tanema.

The Lovono archive includes three narratives from the oral tradition of Vanikoro. They were all told by Rubenson Lono.

One recording is a version of the story of Lapérouse (in Lovono, Toñaki ie Laperus “the ship of Lapérouse”): part 1, part 2. Lono explains how the two ships were magically destroyed by the Gods of the island.

Among other stories (not translated yet) is that of the origin of the kauri tree – a myth we also recorded in the main language Teanu.

The orthography proposed for transcribing the Lovono texts follows this alphabetical order:

Table 1 – The 18 phonemic consonants of Lovono

Lovono has five vowels, all short.

Table 2 – The five vowels of Lovono

“Where are y'all coming from? – We were in our garden, we were planting yams.”