Lemerig is a moribund Oceanic language spoken by only 2 or 3 people, on the island of Vanua Lava (Banks Islands), in northern Vanuatu.

Its phylogenetic affiliation is the same as the other 138 languages spoken in Vanuatu: it is an Oceanic language – and thus a member of the vast Austronesian family that covers most islands in the Pacific. Within the northern Vanuatu “linkage”, Lemerig forms a linguistic transition between Vera’a on the one hand, and Mwotlap on the other (Kalyan & François 2018). 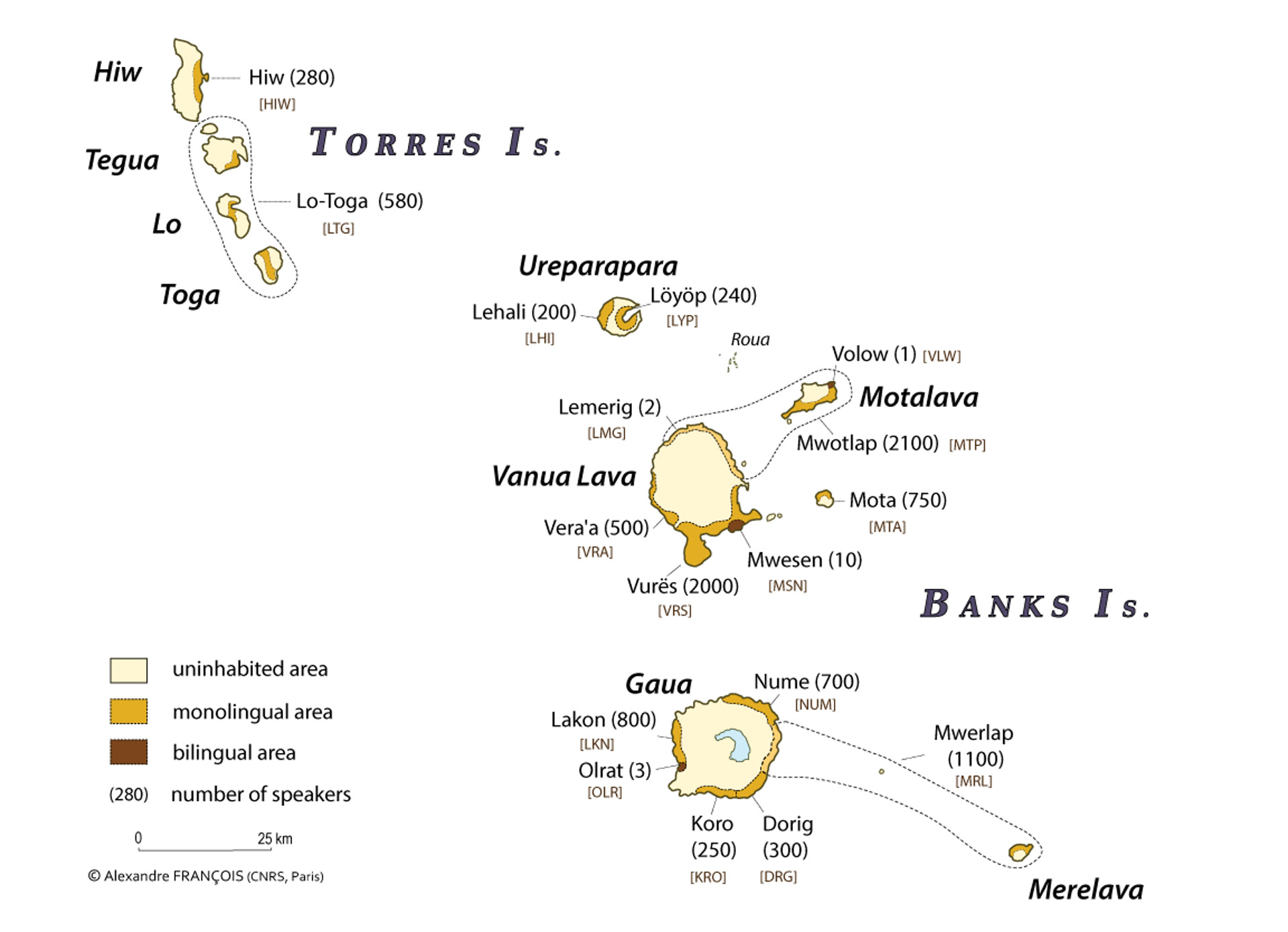 Lemerig is traditionally the name of the mountainous area along the north coast of Vanua Lava. The language of the same name used to be spoken by a small population – probably never more than 100 people – in hamlets scattered in that area. The same language is also known under the names “Päk” (or Bek or Abek), after the name of a coastal village; it is also mentioned as “Sasar” in some sources.
Since the early 20th century, Lemerig speakers left their hamlets, as they underwent the pressure to live in the larger settlements in the island’s south (Vera’a, Vetubōsō, Sola). Some also were recruited in the plantations, either in Vanuatu or in Australia (Blackbirding), or underwent the epidemics. This resulted in the considerable weakening of the Lemerig language (François 2012).
In the last decades, the speakers ceased to form a community, as they scattered across different villages around the island of Vanua Lava. In the 1990s and 2000s, some speakers resided on the east coast (Lalngetak), others in the west (Vera’a), others in the south (Mwesen), others in the north (Päk)… These last speakers had shifted their main language either to Vera’a, or to Mwotlap, and could only remember Lemerig as a language they had heard in the 1940s.
It is difficult to ascertain exactly how many individuals still know the language well enough to be considered speakers. In the early 2000s, Lemerig had a handful of elderly speakers, but most of them have passed since then. We believe two or three may still be alive today, whether speakers or semi-speakers.

Alexandre François discovered the existence of Lemerig accidentally in June 1998, as he was interviewing the last speakers of Mwesen, another endangered language of the southeast coast of Vanua Lava. Joj Lorin, one of his Mwesen teachers, happened to also remember another “language from the mountains”, namely Lemerig: he had learned it in the 1940s, as a teenager in love with a woman from a northern hamlet. François recorded a couple of minutes from him, as a short sample. (Joj Lorin passed away the following year.)

A few years later, in 2003, François went back to Vanua Lava looking for other Lemerig speakers. He first met two of them in Vera’a (west coast), Bes Tabeva and Rogen, who told short stories. Then François walked to Lalngetak, an isolated village on the other side of Vanua Lava; there he met Wolta Robin, the last fluent storyteller in Lemerig, who told two traditional stories:

The latter story is one of the liveliest and most precious versions we recorded of the famous myth of the Banks islands. (Wolta Robin passed away the following year.)

Finally, a third expedition in 2006 allowed François to meet Taitus Sërortēlsöm, one of the very last speakers of the language. Taitus would not tell stories, but he was able to provide considerable linguistic data. He also helped transcribe the long story of Kpwet recorded in 2003. (Taitus also passed away the following year.)

Based on this careful work of transcription and interpretation, François wrote the first ever book in Lemerig, in monolingual format, meant to keep a memory of the language for future generations: “Nvāv ‘ām 'a Lēmērig – Traditional stories in Lemerig (Vanua Lava)”.

The orthography proposed for transcribing the Lemerig texts follows this alphabetical order:

Lemerig has 15 phonemic consonants. The following chart lists the phonemes themselves (using IPA); the orthographic convention is shown in brackets. For example, the letter ‹q› in the orthography encodes the labiovelar stop /k​͡pʷ/.

Table 1 – The 15 phonemic consonants of Lemerig

The personal pronouns of Lemerig distinguish four numbers: singular, dual, trial, plural. They also strictly encode the contrast between ‘inclusive we’ [=you & me & others] and ‘exclusive we’ [me & others]. Thus the pronoun gätru “1inclusive: dual” means ‘you & me’, whereas kamaru “1exclusive: dual” will read as ‘one person (other than you) + myself’, i.e. ‘me & him/her’.

For more on the languages of Northern Vanuatu, visit http://alex.francois.online.fr. The following selected publications help understand Lemerig in its context: