Lakon is one of the six languages spoken on Gaua, the largest of the Banks Islands, in northern Vanuatu. It has about 800 speakers. Its phylogenetic affiliation is the same as the other 138 languages spoken in Vanuatu: it is an Oceanic language – and thus a member of the vast Austronesian family that covers most islands in the Pacific. 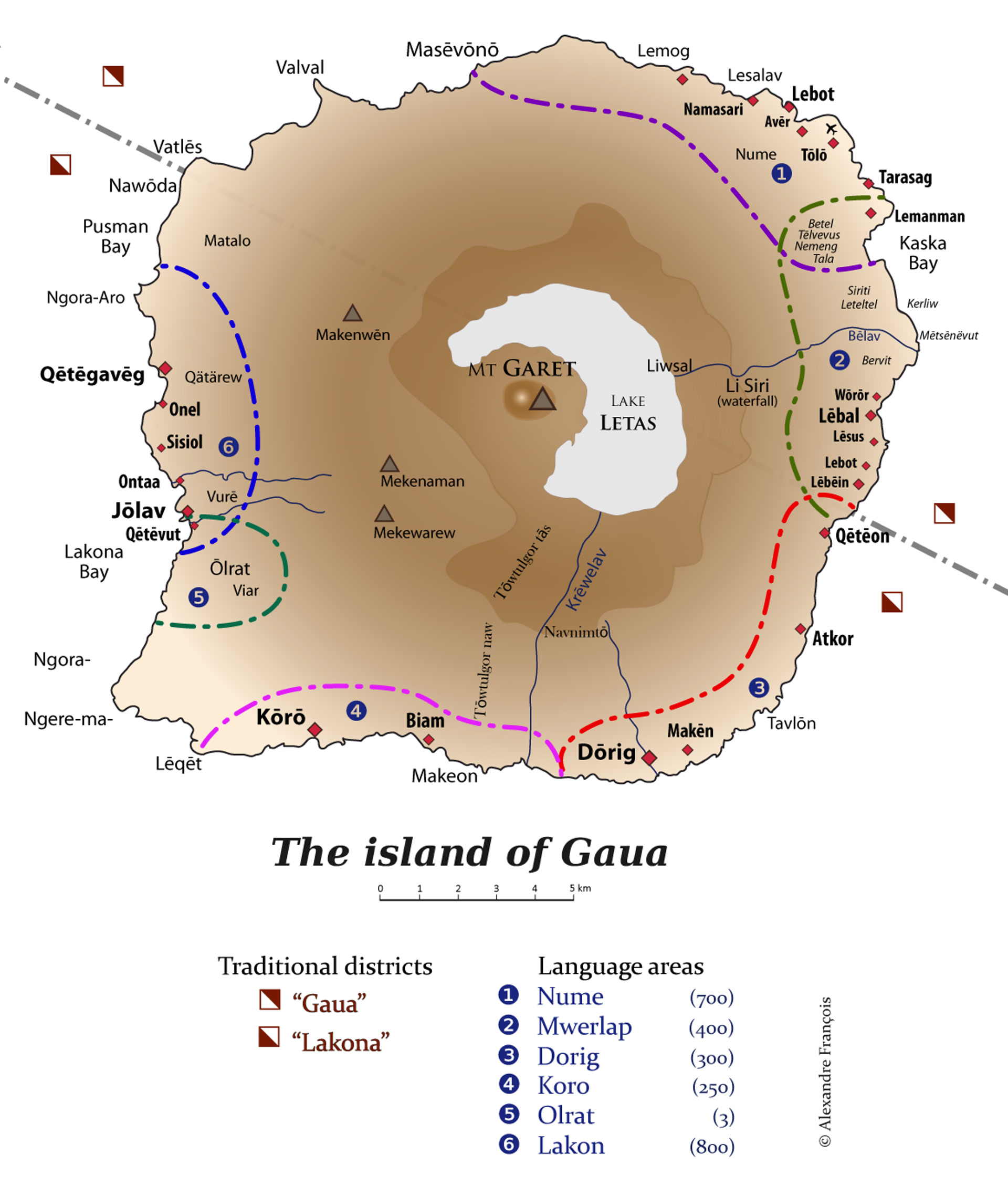 The round island of Gaua is dominated by its central volcano, known in English as Mount Garet (Makē Gäräs in Lakon), and by the lake that has formed in its caldera (lake Letas in English, Ēpitäh in Lakon).
Gaua is home to two dozen villages or hamlets, scattered around its circular coast. The six languages spoken there form a dialect chain (Kalyan & François 2018) that can be cited clock­­wise, as Nume – Mwerlap – Dorig – Koro – Olrat – Lakon.
In the local languages, the island is known not by one name, but two: Gaua and Lakona. In principle, these names refer res­pec­tively to the north­east half vs. the south­west­ern half of the island [see map]. Languages also use one of these two words (either “Gaua” or “Lakona”) as a general name for the whole island.
“Lakon” is the main language spoken on the western coast of Gaua, along the bay known as “Lakona Bay”. The language is sometimes called Vurē (not to be confused with Vurës, a language of Vanua Lava). By decreasing order of size, the three main Lakon-speaking villages are Jōlap or Jōlav [ʧʊˈlaɸ], Qētēgavēg [k​͡pʷɪtɪɣaˈβɪɣ], and Ontar or Ontaa [ɔnˈtaː].

Alexandre François spent some time in the Lakon-speaking area in August 2003, as part of his linguistic survey of Gaua. Thanks to a specially designed questionnaire (François 2019), he quickly acquired the essentials of the language – enough to understand its basic grammar and lexicon (François 2011), and also to collect some of the traditional oral literature.

The Lakon recordings include musical recordings, belonging to different genres:

Several of these recordings were made on 26 Aug 2003 – on the day of St Bartholomew, the patron day of West Gaua. Some made it into a CD publication of the best ethno­musico­logical recordings for northern Vanuatu (François & Stern 2013).

The other category of recordings is a set of 18 myths or tales – known locally as Suusuu pule maraw “Stories of the Spider” (François 2013: 222) – told in the Lakon language, by various storytellers of all ages. Among them, several have been selected to be here transcribed and translated:

To these four narratives, we can add a monologue by Nelson Vagēl explaining the importance of hawks in the tradition of West Gaua:

Based on his work of transcription and interpretation, François published two books in Lakon, in mono­lingual format, meant to endow younger generations with literacy materials in their native language:

The orthography proposed for transcribing the Lakon texts follows this alphabetical order:

Lakon has 16 phonemic consonants. The following chart lists the phonemes themselves (using IPA); the orthographic convention is shown in brackets. For example, the letter ‹q› in the orthography encodes the labiovelar stop /k​͡pʷ/.

Table 1 – The 16 phonemic consonants of Lakon

The glottal stop [ʔ] is not phonemic. Like in German, it occurs predictably as a syllable boundary marker, at the beginning of vowel-initial syllables in lexical (but not grammatical) words – e.g. ēn ‘äh [ɪn.ʔæh] <art song> ‘a song’; ’ät’ätä [ʔæt.ʔætæ] <redup~look> ‘look, watch’. Even though it is predictable, it is sometimes included in the ortho­graphy.

Table 3 – Some words in Lakon

The personal pronouns of Lakon (François 2016) distinguish four numbers: singular, dual, trial, plural. They also strictly encode the contrast between ‘inclusive we’ [=you & me & others] and ‘exclusive we’ [me & others]. Thus the pronoun wōjō “1inclusive: dual” means ‘you & me’, whereas gamaa “1exclusive: dual” will read as ‘one person (other than you) + myself’, i.e. ‘me & him/her’.

For more on the languages of Northern Vanuatu, visit http://alex.francois.online.fr. The following selected publications help understand Lakon in its context:

— 2011. Social ecology and language history in the northern Vanuatu linkage: A tale of divergence and convergence. Journal of Historical Linguistics 1 (2). 175-246.