Kakabe is spoken in Guinea, on the plateau of Fouta-Djallon. It belongs to the Mande family and, within its Western branch, to the Mokole group. Kakabe is strongly influenced by Pular, a language of the Atlantic family. Kakabe is spoken by approximately 50 000 (no official census data is available concerning the number of Kakabe speakers and this approximate number comes fieldwork data). Until recently, there were almost no studies dedicated to Kakabe.

The Kakabe language is spoken in about thirty villages located on the Fouta-Djallon plateau in the middle of Guinea. In the middle of the 18th century, this territory was invaded by the Muslim Fula who enslaved most of the local population including the Kakabe. Slavery was officially abolished in 1958 following the independence of Guinea, however, Fula have maintained a dominant position in Fouta-Djallon and Pular, the language of Fula is considered as the main language of Fouta-Djallon (Diallo 2013). A considerable part of Kakabe fluently speak Pular, which has exercised a profound influence on the grammar and the lexicon of Kakabe. Apart from Pular, the Kakabe often speak Maninka, another Mande language which is considered one of the three national languages of Guinea.

The Mokole languages, and Kakabe in particular, remain relatively little studied, with almost no publications on Kakabe until recently. A dictionary (Vydrina 2015) and a grammatical sketch (Vydrina 2017) are currently available.

There are relatively large numbers of Kakabe speakers, however, no urban center is considered as belonging to Kakabe only, and the language is that of a rural population.

Apart from Kakabe, there are other villages where varieties similar to Kakabe are spoken, namely, Wure-Kaba and Kourou-Maninka (see map). It should be noted that even though these two languages, are linguistically closer to Kakabe, nevertheless, their speakers identify themselves with Maninka rather than with the Kakabe (no description is available for either Wure-Kaba or Kuru-Maninka, and my observations are based on data that I collected during the fieldwork). 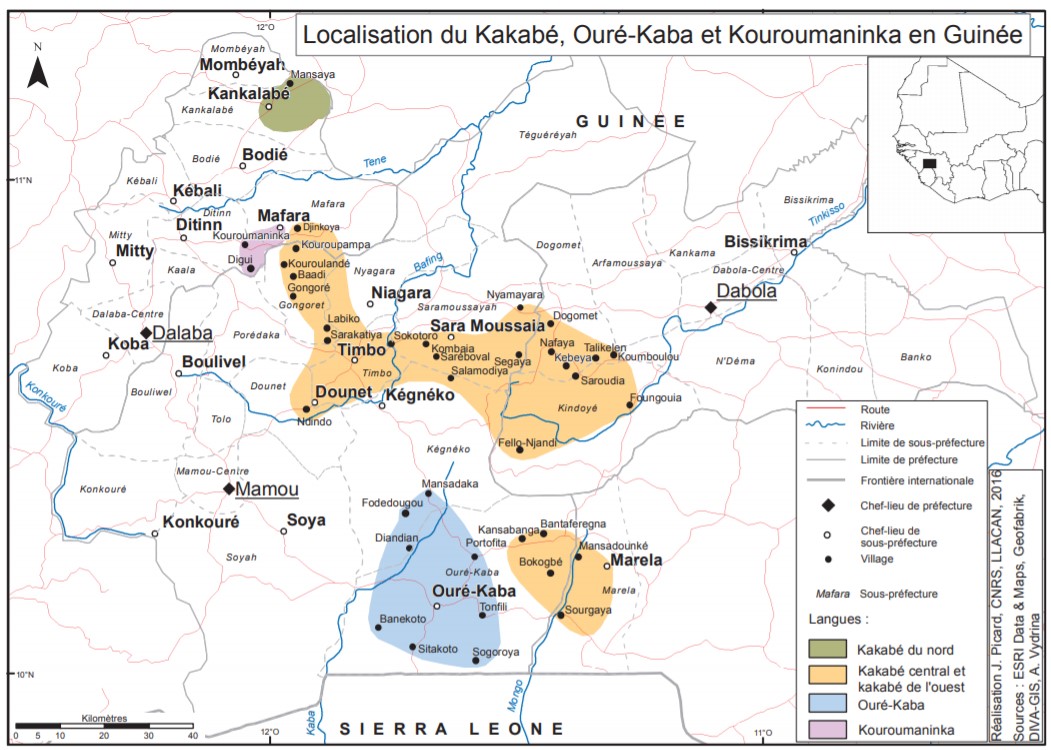 As to the level of endangerment, only the northern dialect can be considered to be in danger of extinction. In the sub-prefecture of Kankalabe where this dialect is spoken, it is often abandoned in favor of Pular. In contrast to that, in the rest of the Kakabe area, this language holds a relatively strong position in a large part of the villages. And, despite the stigmatization of the language due to the legacy of slavery, it continues to be widely practiced and even, in some cases, acquired by Fula and Maninka. Therefore, the situation is rather that of a relatively stable multilingualism than of a language shift.

At present, Kakabe are Muslims. Their Islamization is more recent compared to their Maninka and Fula neighbors. This is due to the fact that before the abolition of slavery, Fula forbade slaves access to Islam (Botte 1994; Dupire 1994). Since 1958, but especially in the last two decades, more and more mosques and Koranic schools are being been built in the villages of Kakabe.

The texts were recorded during several field trips carried out between 2008 and 2018 in different Kakabe villages and in Dogomet, a multilingual city where Kakabe live next to Fula and Maninka.

The annotated texts included in the corpus represent conversations between men, women, adults and children, or spontaneous or semi-spontaneous monologues. Finally, a number of texts come from recordings made during storytelling sessions during night gatherings in the villages.